Today, then, it’s time for the fourth entry in my week-long series of posts counting down my favourite albums of all time, which was inspired by Danny Baker’s recent BBC4 show Great Album Showdown. Over the past three days I’ve let you know my seventh-, sixth- and fifth-favourite albums: Eels’ Blinking Lights and Other Revelations, REM’s Up and Lightning Seeds’ Jollification, respectively. Which means today’s number – the number four – is brought to you by… 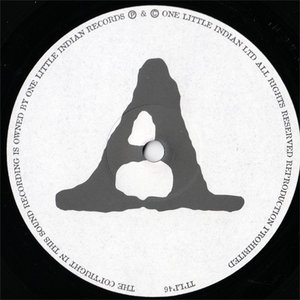 Album label. I chickened out of showing the cover art, mainly because I don’t want my blog showing up in THOSE kinds of searches. Google it if you like, but be warned – it’s a graphic image of childbirth.

Anarchy, which was released in 1994, was Chumbawamba’s sixth studio album, and their first to be released on a commercial label – One Little Indian. Their previous albums had been self-released on their own label, Agit-Prop. Agit-Prop had long struggled with distribution, which meant that the band’s reasonable level of success on the live circuit – they’d been earning a living from gigging for several years – was not reflected in their record sales. As a result, this was their first album to chart, reaching number 29.

Anarchy is, loosely speaking, a concept album based around an anarchist view of pop culture and politics, though it needles-in on specific issues rather than trying to offer a broad synopsis. It’s a post-punk record, not in the narrow genre sense of that term, but in the sense that it takes the energy and anger of punk but transposes it into a kind of hard-edged, politically astute pop. It’s an angry record that’s also funny; a record with a surface silliness that belies the seriousness of much of what it has to say; a cheerful record that has moments of aching sadness; and a guitar-driven record that embraces synthpop and hip hop (and even faint traces of ragga).

Let’s start with something that makes me uncomfortable about this record: its relationship to violence. This is something of a perennial bugbear in anarchist circles, with some on the extreme fringes of the movement arguing that the world has to be ‘cleansed’ by fire and violence so that it can be rebuilt from scratch. Personally, I find that view repugnant, and stupid: a society founded on violence is a society founded as a hierarchy (the hierarchy of who has the guns, or the matches), and anarchists should be interested in getting rid of all hierarchies, not replacing the existing ones with new ones. Revolutions – in which the oppressors and the oppressed swap places, but oppression itself continues – should be left to Marxists (who will be so busy reading Žižek on sex toys that they’ll never get round to actually having one). There are points on this album where Chumbawamba seem to take the opposite view, or at least come close to doing so.

On ‘Give The Anarchist A Cigarette’, for example, they sing the refrain ‘Nothing ever burns down by itself/ Every fire needs a little bit of help’. The sleeve notes play up the song’s connection with a line from a Bob Dylan film, and the rest of the lyrics suggest it’s more a spasm of anger at the idea of Dylan usurping the title anarchist, even briefly – but still, there’s that refrain. It’s possible it’s intended metaphorically, that they want anarchists to light a virtual fire rather than a real one, but it still makes me uncomfortable. It’s a great introduction to the album, though: a big, bold singalong chorus, and lyrics that make you think.

As you might expect from Chumbawamba, big singalong choruses are a recurring feature of this album. There’s ‘Timebomb’ (which is explicitly about the powerful forces contained in the individual, not actual explosives), and crams multiple references to pop culture and a mishmash of musical styles into a seamless 4-minute package. In a similar style, ‘Love Me’ (which rips Bono’s “ironic” Zoo TV persona to shreds) and ‘This Year’s Thing’ (which performs a similar function for the lower reaches of the music industry) present choruses that all-but demand the listener to join in, even if they haven’t been posted online. (The snarling wall of guitar during the “break down” section of ‘This Year’s Thing’ is also my favourite individual passage on the whole album – I love snarling guitars, if they’re deployed in service of something worthwhile.)

There are also much less bombastic moments on the album, such as ‘Homophobia’, an angry, melancholy folk song about the real-life murder of a young gay man in Leeds, and ‘Rage’, which appropriates the poetry of Dylan Thomas to respond to the AIDS crisis, and the death of Derek Jarman specifically. It’s songs like these that help this album to make the leap from simply good to great: the loud, shouty singalongs are wonderful, but it’s in the quieter moments that the band’s musicianship and acute political understanding are able to shine through. Go and read the lyrics to ‘Homophobia’, if you have the time – you won’t need long since, even recorded, it only lasts two-and-a-half minutes. You’ll struggle to find a clearer plain English definition of the word (‘you can’t love who you want to love’), or a more incisive summary of the causes of mid-90s homophobia: everything from AIDS-related prejudice, to misguided machismo and too much alcohol, to the synergistic effect when church, government and police all express anti-gay sentiments. All that, and it makes you weep, too – for all the people prevented from loving who they want to love, and for the specific young man, whose death is so powerfully described.

Songs really don’t come much better than that, but it’s not unique on the album. The band’s ability to summarise complex ideas and present them in an appealing musical form is also highlighted in songs like ‘Never Do What You Are Told’. On the surface it’s a silly, brief throwaway song (‘don’t wear slippers til you’re old’), but think deeper and it’s actually the heart of the album, and a beautifully simple summary of the central tenet of anarchism – not doing what you’re told, but doing what you can see for yourself is best.

And then there’s ‘Bad Dog’, a contribution to sex-positive feminism, and a riposte to all those authoritarian feminists who found themselves alongside religious fundamentalists as they called for women to struggle against their sexual urges – and again expressed in simple English. That song also leads into what is the culmination of the album, and the point to which it has been building – the collaboration with their ex-protégées Credit to the Nation on the coldly furious call to anti-fascist resistance, ‘Enough is Enough’. This is the point at which the album finally sets all joking aside to deliver a sombre message with deadly serious intent: ‘Open your eyes. Time to wake up. Enough is enough.’

Anarchy is an anarchic album, in the fullest sense of that word. It was made by a band who – even though they were freshly-signed to a commercial record label – were still running themselves as an anarchist collective. It’s anarchic in its two-fingers-to-authority spirit. It’s anarchic in the way that it’s a patchwork quilt made from different ideas and different musical genres. It’s anarchic in the way it identifies politics as a way of life encompassing everything – sex, birth, laughter, sadness, death – not as something removed from everyday life, and conducted by professionals. And it’s a great album because it encompasses all of that – the whole stuff of life – in a package made up of great tunes, and great musicianship. This album will make you laugh, and it will make you cry, and it’ll make you dance, and it’ll make you sing – and all the while it will be teaching you a new way of thinking about the world, and a new of living in the world. I call Anarchy a great album, and it is. But in truth it’s so much more than that.

So, there we go, that was my fourth-favourite album of all time: Anarchy by Chumbawamba. Tomorrow it will be the turn of my third-favourite, which will be another change of pace…