I’ve been watching the Paralympics, with the result that I’ve seen rather more in the way of TV adverts than I usually would. One of the ads I’ve seen most often is for Bupa Care Homes, and it purports to tell Charlie’s Story. I’ve embedded the advert below for ease of reference.

Ok, so first of all I want to draw your attention to the caption at the very beginning of the ad, the one that reads “Charlie. A true story.”

Next I want to draw your attention to the section of the narration that begins at around 12 seconds, in which Charlie informs us that he “even won a medal in the war”.

And, finally, I want to draw your attention to the section of the narration at around 23 seconds when he tells us “now I’m 83”.

Charlie’s reference to ‘the war’ is a little ambiguous since it could, theoretically, refer to any armed conflict. However, the phrase ‘the war’ is very generally understood to mean the second world war (see, for example, this google search which, at the time of writing, returns a wikipedia article about a US documentary series on WWII as the top result for the exact string ‘the war’).

Now for a brief history lesson. WWII is usually regarded as having ended on VJ Day – 15thAugust 1945. (You can, if you’re a real history nerd like me, make a case for 12th September 1990 as the formal end date, but even I would have to concede that’s a technicality. Hostilities ceased on VJ day, and that date marks the de facto end of WWII.)

A final brief history lesson: during WWII, British men were not called up for military service until they had reached the age of 18.

Draw all this together and what can we say? That it is literally impossible for Charlie – or any other British man of his age – to have fought in the conflict that is generally referred to as ‘the war’. It also means that Charlie’s cannot possibly be ‘a true story’.

As an ordinary person just seeing this ad on TV with no background information, I was initially persuaded that the advert was a complete fabrication and that ‘Charlie’ was just an actor. This in turn caused me to question the quality of the care homes operated by Bupa. If they have to lie to create a case study featuring a satisfied customer, I reasoned, this would imply that they couldn’t find any real satisfied customers to feature in their advert, and this in turn would imply that the standard of care in Bupa homes is so poor that there are no satisfied customers. This is, of course, the exact opposite of what the advert set out to achieve – to persuade me that Bupa operate excellent care homes.

If I had only seen this advert on TV these would still be my conclusions. However, in the course of writing this post I found the advert on YouTube, and discovered that other people had reached broadly the same conclusion as me, and this has been raised in the comments thread.

So, the claim in this ad is that Charlie is 83 now, and was married and won a medal in the war. This means he was born in 1929 and was 11 years old at the outbreak of war. Is this really a “true story” in the normally accepted meaning of the phrase?

I also saw that BupaUK had responded:

Hi there. This is a true story, and Charlie is a real customer. He served in the Middle East in the late 40s, and was awarded for his bravery. We think what matters is that Charlie served his country and is a lovely man who’s had a very interesting life. Hope you enjoyed the ad.

There is also a comment on the thread from someone identifying herself as TracySutton12 (the text accompanying the video on YouTube gives Charlie’s full name as Charlie Sutton):

For all of you users causing trouble on here, slating this ad. @iassersohn Charlie is in actual fact my father, all the facts in this story are based around my Dad’s life. Dad did serve in Palestine and won a medal – the Palestine Star. He is married to Margaret and they have chickens at the home. We are hatching chicks this year. So find something better to do than picking holes in Bupa who do a fantastic job looking after my Dad.

Now, anyone who’s spent any time on the internet knows that it’s not at all hard to create bogus online identities, and I can’t exclude the possibility that TracySutton12 is a sockpuppet. In this connection, I’d draw attention to her profile page at YouTube. 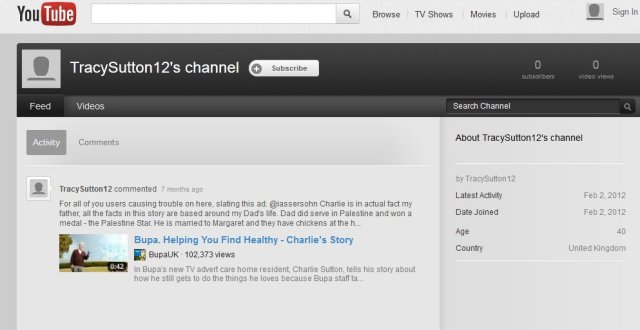 As you can see (click the picture to enlarge), the post reproduced above is TracySutton12’s only activity on the site. Her profile also gives her age as 40, which would suggest that she can’t have been born before 1971. We know that Charlie must have been born in 1928 or 1929 and, since the advert implies (at around 20 seconds) that he had married his wife Margaret before his military service, the assumption must be that she was a similar age and, therefore, that when TracySutton12 was born both her father and mother were in their early 40s. This isn’t impossible, of course, but it would have counted as quite late for having a child at the time, as this table (taken from the Office for National Statistics’ Social Trends report) makes clear. 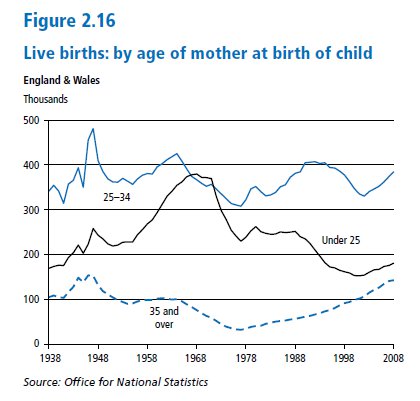 Of course, the fact I can’t exclude the possibility that TracySutton12 is a sockpuppet doesn’t mean that she is one. It’s true that what she writes in her one and only YouTube comment is extremely helpful to BupaUK in the way it backs up their factual claims. And it’s also noteworthy that she’s concerned not just to vouch for her father’s authenticity but also to praise the quality of her father’s care at Bupa, which must be very gratifying for them – but none of this means that she is not 100% genuine.

Anyway, let’s assume that TracySutton12 is genuine. Her claim that her father was awarded a medal called ‘the Palestine Star’ doesn’t quite seem to check out, since I haven’t been able to find any medal called by that name. There were various ‘star’ medals awarded during WWII, but only people who served during the period of the conflict were eligible for those. It would seem that people who served with the British army in Palestine in the period 1945-8 were awarded the General Service Medal with a special clasp. Even though this medal is not referred to as a star, it would seem likely that this is the medal Tracy is referring to. (Although it’s curious that Tracy, who has presumably seen her father’s medal and thus knows it’s disc-shaped, would call it a star.) Interestingly enough, as a service medal this was awarded to anyone who took part in the campaign and was not, as BupaUK claim in their post reproduced above, ‘awarded for bravery’. A small oversight, perhaps, but it does seem to fit into a pattern.

To clarify what I mean by that: Charlie Sutton did not serve ‘in the war’ as the narration in the advert itself claimed, and it would seem from the information I’ve been able to glean from other sources that he was not awarded a medal for bravery either. It would probably be unfair to call this dishonest or deceitful, but it does seem disingenuous to me. It also seems a little disrespectful to actual WWII veterans – not to mention people who were decorated for bravery – to pass off a period of National Service (albeit one that involved active deployment overseas) as the equivalent of fighting in a war, or a campaign medal as a bravery award.

It’s also a little curious that Bupa chose to do this. If Charlie’s life was as interesting as they claim then it’s strange that they felt the need to ‘sex it up’ for their advert. And I also have to wonder how, if they are as attentive to the life stories of their customers as they claim, Bupa can think that someone who is clearly too young to have done so fought in the 2nd World War.

In a way, though, that’s all secondary to what actually strikes me as most peculiar of all about this advert. As I said earlier, when this was just an ad I saw on the TV I registered the discrepancy between Charlie’s age and the claim that he fought in the war, jumped to the conclusion that this meant the advert was completely fabricated, and assumed the worst of Bupa as a result. In the process of researching this post I’ve discovered that conclusion was premature and the assumption unjustified – but most people won’t do this kind of research.

The dating of the comments on YouTube is not precise, but it seems that Bupa have been aware for seven months that some viewers were interpreting the ad in the same way as me and – even though this clearly has the potential to undermine the effectiveness of the advert, and even to do active harm to their reputation – are still showing the ad in it’s original, unedited form. That’s perhaps the most curious thing of all, especially since it was so easily corrected: just say that Charlie won his medal in the army, not the war.